skip to main | skip to sidebar

The Paralegal Place: Paralegals and Trial Organization: An Attorney's Perspective

The Paralegal Place: Paralegals and Trial Organization: An Attorney's Perspective
Posted by motherof9 at 8:59 AM No comments: Links to this post

I apparently hadn't given enough consideration to the reality of raising bi-racial children.  By the time my twins were born six years ago we had a truly blended family and home life in quite a quirky way.  I had already six children from my first marriage, my ex's family and I remained very close and they even accepted my new husband as a part of the family; we adopted a barely teenage boy who was half African American and half Puerto Rican; the house was always full of neighbor kids of all backgrounds and cultures.

My husband is brown and I am white, of European decent.  He doesn't know what nationalites his ancestors are so I use the term brown as it is his preference.  When we became pregnant, the subject had come up of course in conversation between friends and even between my husband and myself out of fear that the children may have issues out in the world with prejudice.  I was told by many that it was certain to happen and to prepare myself for it.  What I wasn't prepared for was that it would sneak into our home.  It entered through what I would have thought to be the most unlikely source...the twins themselves.

It was sorta funny at first with the games they came up with on their own.  I've mentioned before the time we were in the mall and Anthony had to jump onto the light tiles because he's white and Ashley had to jump from dark tile to dark tile because she's brown.  I didn't say anything at the time - it seemed innocent enough, right?  But this game they played at the mall was more and more a way of identifying themselves.  Soon, they decided Ashley would have chocolate ice cream and he would have vanilla.  She'll have chocolate milk 'cause its brown and he'll have strawberry because its not.  By now I've mentioned to them from time to time that everyone is their own color - nobody in our family is exactly the same color, although ironically, Ashley and our "adopted" son are too close to detect a difference.

Today, we were walking in the store parking lot, the twins; one of their older brothers, Josh; Josh's girlfriend; her nephew, and me.  Anthony announces hey we are five white people and one brown!  Mind you now they are bi-racial TWINS, and the other child is Mexican.  Ok... enough.  Time for me to start asking questions I think to myself.  His skin is pale and hers is carmel colored, true and while they aren't insinuating that one skin color is better than another by any measure, my concern here is that they not make more of an issue out of skin color than it deserves, but they seem to be more aware and focused on this difference between them than I am comfortable with.

I've asked if there has been any conversation in school about people's skin color, or if classmates have made comments.  Their responses were "no".  It may just be a game with them and nothing to worry about because they are also very focused on the differences between boys and girls, even definining certain colors as boy/girl colors beyond blue and pink.  Did you know red is a girl color and yellow is a boy color?  This was decided because red is Ashley's favorite and yellow is Anthony's.

I've only started to investigate this phenomenon that has entered our home.  I've just started reading the book Why are all the Black Kids Sitting Together in the Cafeteria written by Beverly Danielle Tatum, Ph.D.  (I'm so aggravated with myself for leaving it in my drawer at work... I got so busy that I forgot I brought it.)Hopefully that will give me some skills to help to guide them to a healthy way of developing their identity that doesn't focus so much on skin color.  I mean, I want to live in a world where that is only as important as eye color or hair color when describing an individual.  I can't expect that to happen if it's not even happening in my own house... can I?

I'm open to advice and I guess posting this to ask for advice, support, or anyone that can identify and comiserate (sp?).
Posted by motherof9 at 11:08 PM 19 comments: Links to this post

Internet - a time saver? I think not.

The internet was supposed to make our lives easier and some major tasks less time consuming. The problem is that there is just sooo much information here that I am becoming overwelmed with information and ideas that I can't actually get anything done lol.


Before I actually used the internet for recreation (back when I had time), I really didn't have much to do outside of working and caring for the family. Now, my Goodness, I have started a dozen projects through information I've collected here and can't seem to finish anything because I'm still learning about the other things I've always wanted to see, create, reconnect with, and just plain play. Until now I didn't know there was so much I wanted to do. I've started crocheting a blanket for my daughter, scrapbooking, sewing, flower arranging, sort of keeping a diary, learned where to shop for bargains (and when), even taking crayon off my wall. The best thing about it though is I've re-connected with some people that held a special place in my history/heart and made a couple of new friends too.  That takes time too, going through pictures, videos, postings, etc... Now I want to fly to Mystic to see Laureen, Florida, South Carolina, back to Massachusetts, etc... to actually spend a little time with more people than is truly possible. Some even moved overseas! (sigh)

My life is more busy now... no... not even a little easier. Thanks internet ;)

I've been looking online now into meditation to slow myself down.  Look, meditation CDs!  rofl!!!
Posted by motherof9 at 9:50 PM 1 comment: Links to this post 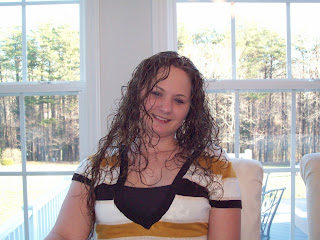 Nicole is my oldest and has been my "right-hand-man" since she was about ten years old.  She was a sort of second mom to her younger two sisters and three brothers at the time.  Since she was 13, she was the babysitter after school, not just for me but for neighbors too; on nights that I had to work late, she'd cook dinner; she helped me to lead the cleaning parties we'd have on Saturday morning dancing to loud music and laughing while we cleaned with the rest of the kids.  We spent so many nights sitting up in my room talking about school, the neighborhood, friends, and not-so-friends.  She was wise beyond her years even as a teenager and for that, I was lucky that it was easy to keep her on the right track to being a great person.

She's 25 now and living in her own apartment.  She is a caretaker for an elderly lady.  A great line of work for her, she has such a nurturing soul.  She is still in Massachusetts watching over Brandon and Brittany who are still there in college... still the second mom.  :)
Posted by motherof9 at 3:09 PM 7 comments: Links to this post

I wanted to introduce you to my babies, the twins, Anthony and Ashley.  They are wonderful.  They stick together like glue.  I found out about a year ago that it's common with boy/girl twins that one be a lefty and the to be right handed (he's the lefty by the way) but it never ceases to amaze me how opposite they are from each other.  She was a night owl, he was a morning person and as they grew personalities, she was total girl and he total boy. I don't mean they were kids with female/male tendencies but Ashley is extremely feminine and Anthony extremely masculine.  They play opposite, which is often common for boys and girls their age; they learned opposite, she memorized prayers while he learned colors; he was an extrovert while she was an introvert (they have since switched roles in this area); but I've noticed they even eat opposite if he's eating the meat that day, she's eating the vegatables; he's cruncy peanut butter, she's creamy.  One thing they do have in common is that they don't like to be apart.  They are in separate classrooms at school but otherwise, they are together every minute all day until they drop at night... they are rarely even on a different floor of the house from the other.

I guess my question is, has anyone else noticed this with their twins?  I just think it is the neatest thing to watch them interact with each other.  They are six years old and I still can't take my eyes off them.

THE STOVE IS FRIED AND SO IS MOMMY

In the middle of cooking the chicken rings I was so excited to get a Walmart coupon for from http://www.athriftymom.com/ (one of my most frequented blog destinations) and some macaroni and cheese to go with it, my stove went kaputz...  just stopped working.  Frustrated, I searched all over for what could have gone wrong.  Nothing seemed loose or out of place.

With a groan from me and quite a bit of whining from the twins, sandwiches were the alternative supper choice.  I proably could have heard a lot less whining if I had just let Anthony have the cereal he wanted, but alas, he had the misfortune of having a Mommy that faithfully watches the Today show and I believe it was that very morning that I was witness to how many cookies the sugar in cereal is equivalent to.  The sandwiches probably weren't much better for him (not that the chicken rings are all that nutritious either now that I think about it) but the cookie thing was so fresh in my mind he was doomed to join us in ham sandwiches.  It's been a few days without a stove and I am just fried.  Is there anything healthy you can prepare without a stove besides a salad?  I was up and down the isles that night trying to find some supplies to hold us until the weekend with no stove and either my imagination is limited or humans really need a stove.

Well, we went today looking around for a used (cheap) stove and ended up at the Habitat for Humanity store in our city and got one for $150.00.  There were six of them there but all had sold signs taped to them except two.  They were all sold in these last few days the employee explained.  At least I'm not alone.  I wonder what they ate tonight? and whose gonna buy that yucky last stove?

Now we just have to get it here - it's not going to fit in my Taurus lol.
Posted by motherof9 at 10:43 PM 6 comments: Links to this post

I have a question as to how people would handle this situation:

You and your family are at a friends house for dinner and she's cooked all day a fantastic beef stew.  My son, comes over and whispers to me, tells me he doesn't like it.  Her feelings would be hurt that he didn't like it (it's happened before).  Now what would you do?  He's hungry, can't eat what she's worked really hard for, and I don't want to hurt her feelings.
Posted by motherof9 at 9:15 PM 4 comments: Links to this post

motherof9
Biological mother of 8 and we added one along the way. Circumstances compelled me to move 800 miles from my world, and some of my children who wanted to stay behind.